There is a likelihood that Bitcoin will remain in a consolidation phase on Monday.

The BTC/USD price remained in a tight range even after a surge in American consumer inflation data. It was trading at 19,133, where it has been in the past few days. This price is slightly above last week’s flash crash low of 18,150.

The BTC/USD price has been in a consolidation mode in the past few months. It has remained between the important support at $19,000 and the resistance level at about $20,500. Bitcoin has crashed by more than 60% this year.

Bitcoin has moved sideways recently as concerns about demand continued rising. Recent demand has been a bit low even as Bitcoin has continued to outperform American stocks in the past few days. On Friday, the Dow Jones and Nasdaq 100 indices crashed by more than 1% as worries about inflation continued.

Data published on Friday showed that the American consumer inflation continued rising in September. As a result, analysts believe that the Federal Reserve will continue hiking interest rates in the coming months. The US dollar has surged and is approaching its highest point this year.

Meanwhile, a divergence has happened between Bitcoin and its hash rate. Recent data shows that the total hash rate surged to an all-time high of 265 TH/s. A higher hash rate is a sign of the safety of the network and a sign of more activity in the platform.

Additional data shows that Bitcoin’s mining difficulty soared to an all-time high while Bitcoin mining profitability has continued falling and is hovering near its lowest level in years. The number of Bitcoin transactions has continued rising.

On the 4H chart shows that the BTC/USD price has been in a tight range in the past few days. It has remained around the important level at 19,000. As a result, Bitcoin is consolidating at the 25-day and 50-day moving averages. Oscillators like the Relative Strength Index (RSI) and the MACD remained at the neutral point.

Therefore, there is a likelihood that Bitcoin will remain in a consolidation phase on Monday. The key support level to watch will be at 18,474, which was the lowest level on September 28. A move above the resistance level at 19,500 will increase the probability of the pair rising to above 20,000. 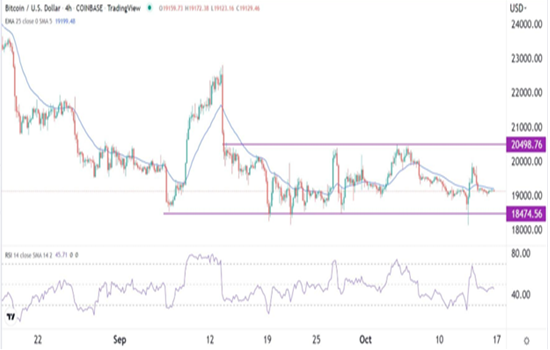 Ready to trade our free trading signals? We’ve made a list of the best Forex crypto brokers worth trading with.

Bitcoin Is Here To Stay, And GBTC Offers ~56% Upside To BTC