Consumer prices are expected to show lower which provides more clues as to whether the US Federal Reserve can ease its aggressive rate hikes campaign.

The Dow Jones Industrial Average continued to rise during its recent trading at intraday levels. It achieved gains for the third consecutive day, by 1.02%, to drive the index to the 33,160.84 level. This happened after rising 1.31% during Monday’s trading.

This was the third consecutive day of gains in the US stock market, leaving the Dow Jones Industrial Average off its year-to-date highs by 10%.News of Binance’s takeover of FTX, and the US midterm vote grabbed investors’ attention on Tuesday.

Consumer prices are expected to show lower which provides more clues as to whether the US Federal Reserve can ease its aggressive rate hikes campaign. While many expect the Federal Reserve to raise the benchmark interest rate by 50 basis points in December, investors are also waiting to see how the October inflation report comes out.

To reach the index in its recent trading, we need to test a bearish corrective slope that moves along it in the short term, as shown in the attached chart for a (daily) period.

Therefore, our expectations suggest a return to the index’s decline during its upcoming trading, throughout the stability of the 33,272.30 pivotal resistance level, to target the 31,727.00 support level. 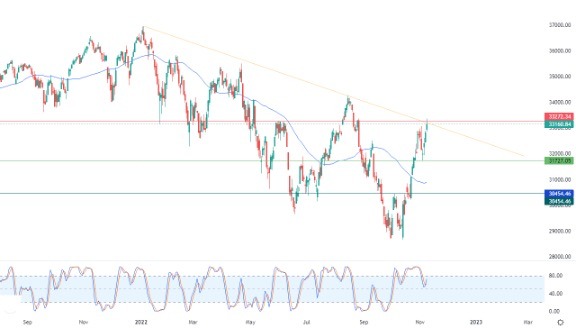 Ready to trade our US 30 technical analysis? We’ve made a list of the best online CFD trading brokers worth trading with.

OKX, Kucoin say proof of reserves will be ready in a month