Technical, fundamental, and sentiment Forex and CFD market a

The difference between success and failure in Forex / CFD trading is very likely to depend mostly upon which assets you choose to trade each week and in which direction, and not on the exact methods you might use to determine trade entries and exits.

So, when starting the week, it is a good idea to look at the big picture of what is developing in the market as a whole, and how such developments and affected by macro fundamentals, technical factors, and market sentiment. Read on to get my weekly analysis below.

I wrote in my previous piece on 14th August that the best trades for the week were likely to be:

The news is currently dominated by the FOMC meeting minutes which were released last week, showing that the Fed remains determined to continue hiking rates until inflation is brought considerably lower, and that Fed members are worried about the economic impact of the ongoing rate hikes. Recent inflation data released in the US and Canada showed inflation slowing, but inflation in the UK was revealed last week to be still increasing, now standing there at an annualized rate of 10.3%. The shift is sentiment is towards risk-off, which has had the effect of knocking down stocks, commodities, and cryptocurrencies, and strongly boosting the US Dollar, mostly at the expense of the commodity currencies NZD, AUD, and CAD.

It is worth pointing out that although the US stock market had been rising in recent week, the US stock market has technically been in a bear market for some time, with the US yield curve being inverted for several weeks now. The US is also arguably in a recession, having seen two successive quarters of GDP contraction, although wages growth and the job market remain relatively buoyant.

To recap there were a few other important economic data releases last week apart from the FOMC meeting minutes. The results were as follows:

The Forex market saw a strong rise by the US Dollar last week. The rise was broad but especially strong against the commodity currencies, especially the New Zealand Dollar.

The coming week in the markets is likely to show a lower level of volatility compared to last week, although there will be a release of preliminary GDP data for the US that could move the market despite the low level of important data releases due. Releases due are, in order of likely importance:

The weekly price chart below shows the U.S. Dollar Index printed a long, strongly bullish candlestick which closed right on its high, in line with the long-term trend, which is bullish. The weekly closing price is a 20-year high, and the week’s strong rise came after the price rejected the support level below just under 105.00. These are all very strong bullish signs.

It will probably be a good idea to look for long trades in the US Dollar over the coming week. This is a very powerful, long-term bullish trend in the most important currency in the Forex market, and it remains likely to continue as long as sentiment remains driven by the fear of ongoing interest rate hikes negatively impacting risky assets, with the US Dollar acting as a primary safe haven. 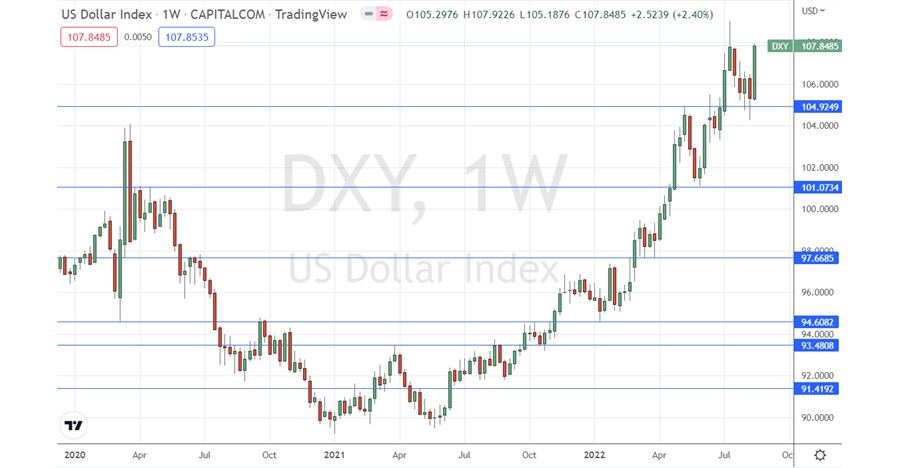 Last week saw the GBP/USD currency pair print a large, bearish engulfing candlestick. The British Pound was not one of the biggest losers against the strong US Dollar over the week, but this pair is technically interesting as it printed the lowest weekly close seen since the coronavirus panic in March 2020.

The price briefly traded below $1.1800 on Friday before closing a little higher than that.

The British Pound is beset by fundamental woes, including new increased inflation figures above 10%, and a Bank of England forecast of a coming recession which will last for five quarters and see GDP shrink by 2.2%.

The strength of the US Dollar and the technical breakdown we see here, plus fundamental headwinds against the Pound, see a short trend trade opportunity in this currency pair. However, it is important to use relatively tight stop losses for the British Pound, as using ATR 1 has over the years produced much better results than the more typical ATR 3. 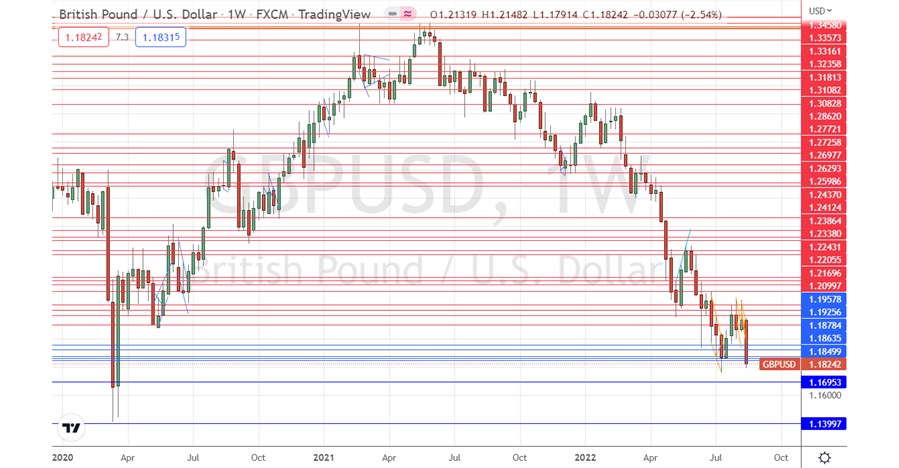 The New Zealand Dollar was the biggest loser of all major currencies last week, despite the RBNZ’s rate hike by 0.50% to 3.00%, the highest rate of any major currency. However, there was no technical breakdown below recent support.

It is notable that the price closed right on the low of the week, which is a bearish sign.

There may be further bearish momentum in the NZD/USD currency pair over the coming week, with all the commodity currencies weak and the NZD weakest of all showing this can be an interesting currency on the short side. 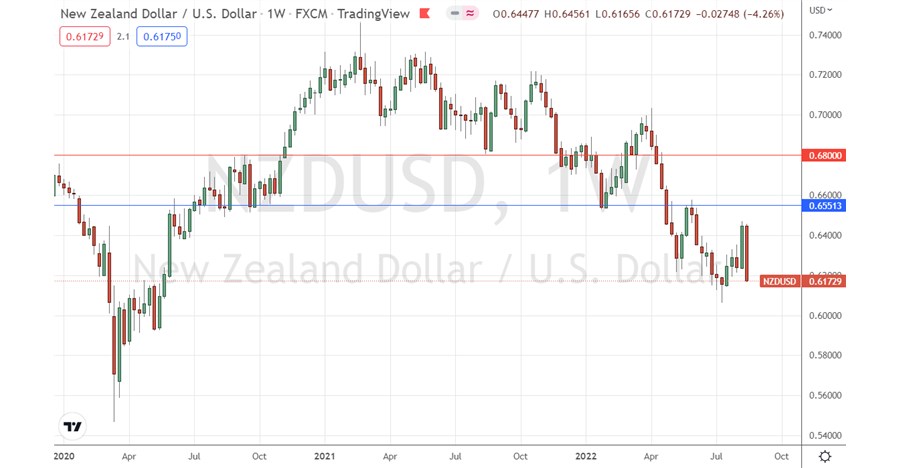 Although we are seeing a bearish market with most commodities and risky assets shrinking against safe havens such as the US Dollar, we have seen Natural Gas gain strongly over the past week to make new multi-year highs.

Volatility is very high and price movement can be extremely choppy.

Long natural gas can be an attractive trend trade as we are seeing a breakout in the price chart. However, anyone trading natural gas should be very, very mindful of the extremely high level of volatility we have seen here over recent months, and trade very small position sizes which respect the volatility.

As commodities in general and energies are quite weak, I do not have very strong faith in a long trade here, which is another reason to keep the position size very small if you are trading natural gas over the coming week. 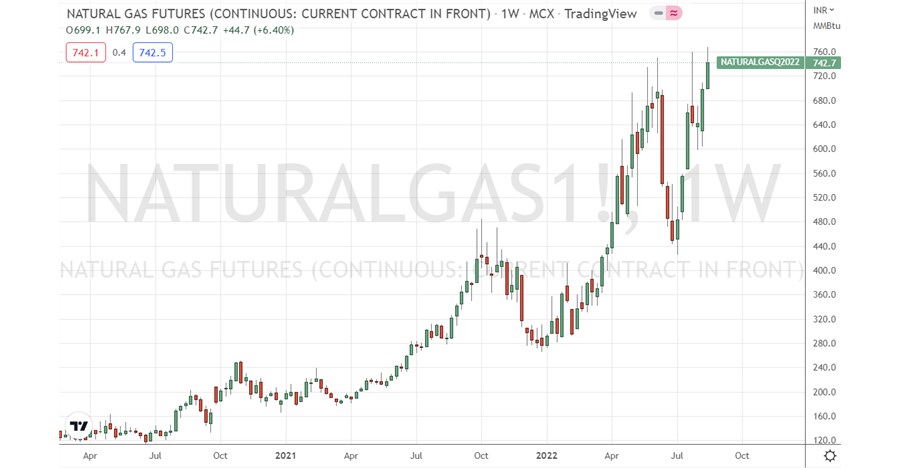 I see the best opportunities in the financial markets this week as likely to be:

Ready to trade our weekly Forex forecast? Here are the best Forex brokers to choose from.

The Cryptocurrency Terra Luna: What Happened? [A 2022 Flash Crash]