The shooting star from the previous session was a sign that perhaps we were going to see some problems, and now it looks like that is starting to come to fruition.

This has been a very strong and impressive rally over the last several sessions, but it is running out of momentum. This makes a lot of sense, as the economic outlook is getting worse. There’s a lot of speculation that central banks around the world are going to continue to “hike less”, but quite frankly that’s got nothing to do with the Federal Reserve. These are just knee-jerk reactions to the Bank of Canada and the Reserve Bank of Australia. For example, the European Central Bank felt the need to raise interest rates to the expected 2%, so it’s obvious that not everybody is on the same page.

Next week, we have the Federal Reserve monetary policy meeting and the FOMC decision. The decision itself should be for an interest rate hike of 75 basis points, and even though some people on Wall Street have started to call for 50 basis points, the reality is that the Federal Reserve board members are no longer day trading the stock market, so they don’t really care what happens to stocks. The shooting star from the previous session was a sign that perhaps we were going to see some problems, and now it looks like that is starting to come to fruition. The real question at this point is going to be how the market determines whether the 3800 level is being supported or not. If we break down below there, we could go down to the 3600 level over the longer term.

The alternate scenario is that we somehow turn around and take out the 3900 level, which would be a bit of a coup for the bullish traders out there, opening the possibility of a move to the 4000 handles. Without the Federal Reserve backing off its hawkish rhetoric, I just don’t see how the stock market continues to rise the way it had been over the last several sessions. 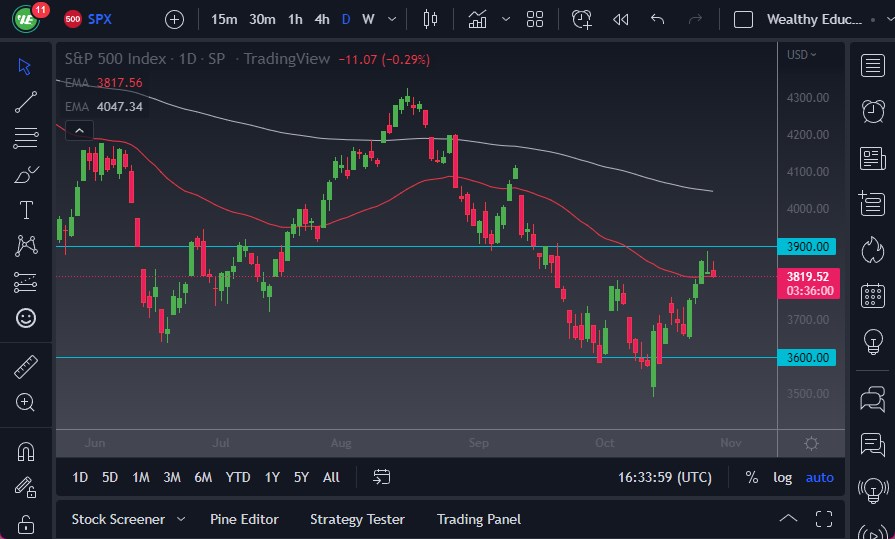 Ready to trade the S&P 500 trading forecast? We’ve made a list of the best online CFD trading brokers worth trading with.