NASDAQ 100 Forecast: Has a Crazy Day

What makes this an even more dangerous setup is the fact that it is earning season now, which kicks off in earnest next week.

Having said that, the CPI numbers for the United States came out during the session at 0.4% versus the 0.2% expected. It’s a bit perplexing, but somebody on Wall Street came up with a narrative that everybody bought into. The reality is that the economy is going to be slowing down, because the Federal Reserve is going to step on the neck of it. In fact, inflation is the one thing they can cure, so therefore you can count on extraordinarily tight monetary policy.

What makes this an even more dangerous setup is the fact that it is earning season now, which kicks off in earnest next week. It’s going to be fun to see how the world reacts to that, mainly due to the fact that we have already started to see ugly forward guidance, and that will more likely than not continue to be a major headwind for the market. If we do rally from here, it’s likely that the market will find a lot of resistance near the 11,500 level. This is an area that had recently cause some headaches, and of course we have the 50-Day EMA is sitting below the 12,000 level and is grinding even lower.

At this point, I suspect it will offer a significant amount of dynamic resistance, but it probably won’t even be tested because it more likely than not only a matter of time before we see some type of selling pressure again, or some type of headline that crosses the wires in order to cause negativity. That being said, we were a little overstretched, so this relief rally could have a little bit in the way of legs, but I look at it as an opportunity to sell from a higher level before it’s all said and done. The 12,000 level is an area that I think will be a huge battleground assuming that we even get there. 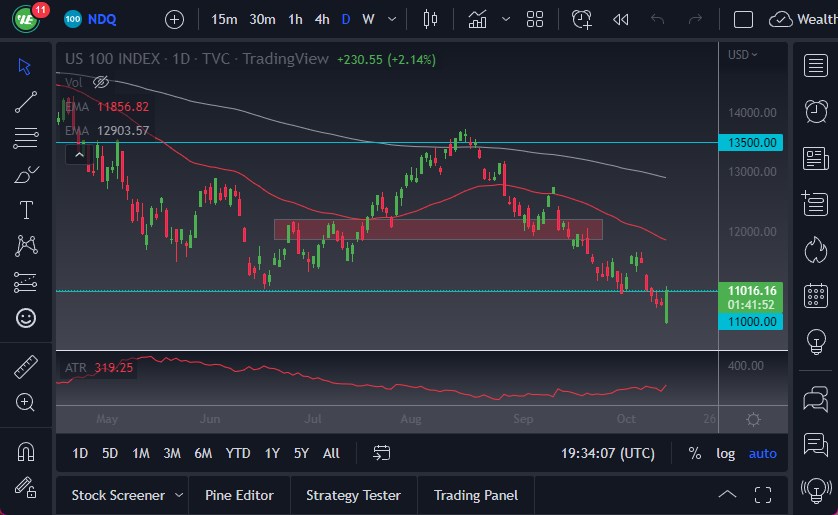 Ready to trade the NASDAQ 100 Index? We’ve made a list of the best online CFD trading brokers worth trading with.

Is Value Investing a Lost Art?

Is Value Investing a Lost Art?