Our expectations suggest a return to the rise of natural gas during its upcoming trading session.

Spot natural gas prices (CFDS ON NATURAL GAS) stabilized at a decrease in the recent trading at the intraday levels, rising by 0.12% now of writing this report. The index settled at the price of $8.066 per million British thermal units, after it fell by 8.35% in the previous session.

US natural gas futures fell about 7% to a four-week low on Tuesday, as production rose to a record high over the weekend, as demand was lower than expected.

While natural gas prices rose 35% in Europe over the weekend, as Russia cut flows from a major pipeline, they are now five times higher than they were a year ago.

In general, natural gas is now very expensive in the US and Europe. It has gone up in the US by 78% in the last year, but not as much as it is in Europe. This difference is likely to protect Americans from some of the worst of the energy crisis.

The United States is the largest producer of natural gas in the world. Natural gas is a by-product of oil production. When American companies began to use techniques to extract oil from shale formations, these activities also opened vast supplies of natural gas. But producers have limited ability to export this gas to other countries as liquefied natural gas (LNG), which is expensive to do and involves sophisticated equipment that transports, freezes and liquefies the gas.

The US has increased the amount of gas it sends abroad this year but still exports only 20% of total supplies. Americans benefit because they don’t have to compete with buyers in other parts of the world. By comparison, the United States exports nearly as much oil as it imports, making the country more vulnerable to the vagaries of the global oil market.

Meanwhile, the decline in futures prices also came as outages continued at the Freeport LNG export plant in Texas, leaving more gas in the US for utilities to pump into stocks next winter.

Freeport was the second largest LNG export plant in the United States, consuming about 2 billion cubic feet per day of gas before shutting down on June 8. The company expects the facility to return to at least partial service in early to mid-November Second.

Therefore, our expectations suggest a return to the rise of natural gas during its upcoming trading session. However, it will be with an important condition, which is the stability of the 8.054 support level, to target the pivotal 9.600 resistance level. 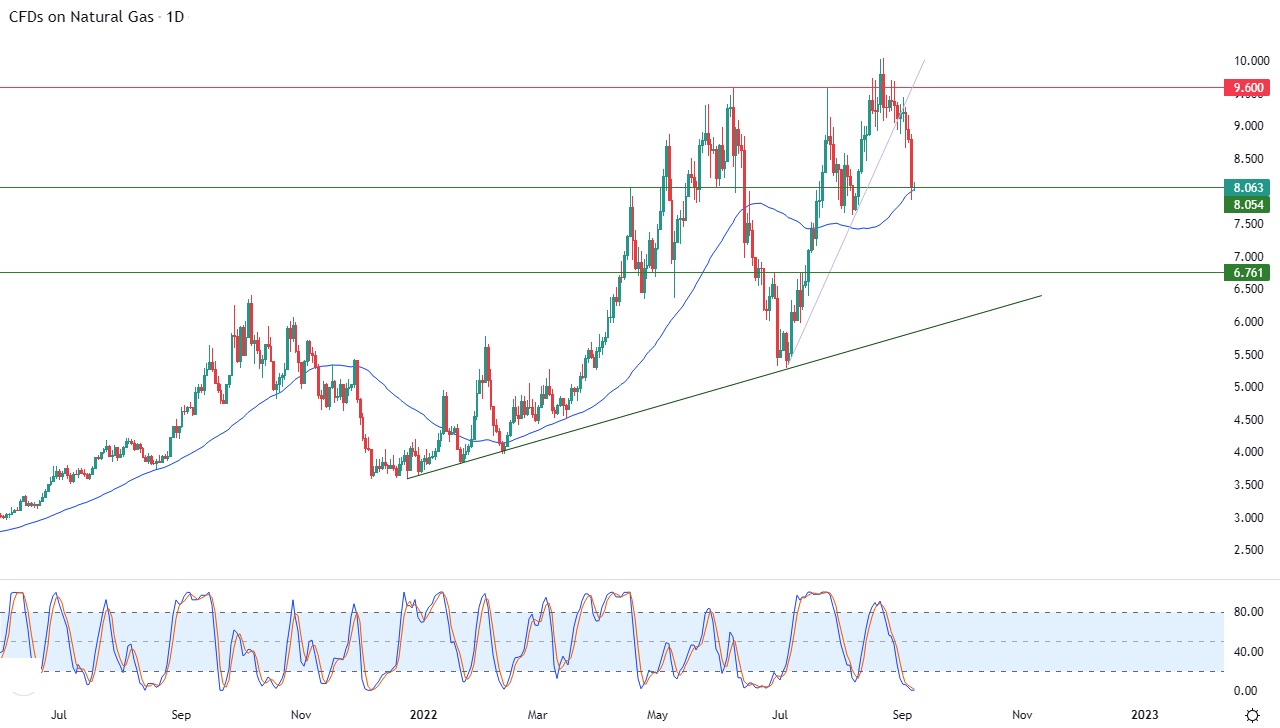 Ready to trade our Natural Gas trading prediction? We’ve made a list of the best commodity broker platforms worth trading with.

A general introduction to the regulation of virtual currencies in France

A general introduction to the regulation of virtual currencies in France