Today’s recommendation on the lira against the dollar

Entering a short position with a pending order from levels of 18.33

Entering a buy position with a pending order from levels of 18.16

Analysis of the Turkish lira

The Turkish lira against the dollar witnessed slight changes, as it stabilized near its lowest levels during 2022. Investors followed early reports that showed a decrease in unemployment in the country on a monthly basis, to record 10.1 percent in July, compared to 10.3 percent in June. This is according to the Turkish Statistical Institute Data Institute. Meanwhile, political tensions between Turkey and Greece continued in the eastern Mediterranean, as the Turkish Coast Guard accused, on Sunday, Greece of firing projectiles at a Turkish cargo ship sailing in the Aegean Sea, which Turkey considered an escalation of tension, according to local media. The dispute between the two countries stems from the existence of competing claims in several exclusive economic zones, which has raised tensions in the region. While Greece oil these allegations. In general, the slow decline of the Turkish lira against the dollar continues, which is awaiting tomorrow’s inflation data, which is expected to record a decline, which may contribute to the dollar’s strength against currencies.

The US dollar against the Turkish lira settled near its highest levels during 2022, before resuming and trading within a narrow range, which is shown on the chart. Unchanged, the pair traded the highest support levels, which are concentrated at levels of 18.10 and 17.98, respectively. While the pair is trading below the resistance levels at 18.28 and 18.33, respectively. The pair is also trading above the moving averages 50, 100 and 200, respectively, on the four-hour time frame as well as on the 60-minute time frame, indicating the long-term bullish trend. The chance of the lira rising against the dollar is still slim as the pair is heading in an overall bullish trend. Each decline of the pair represents a good opportunity to buy, please adhere to the numbers in the recommendation, with the need to maintain capital management.

Ready to trade our Forex forecast? Here’s a list of some of the best Forex trading platforms to check out. 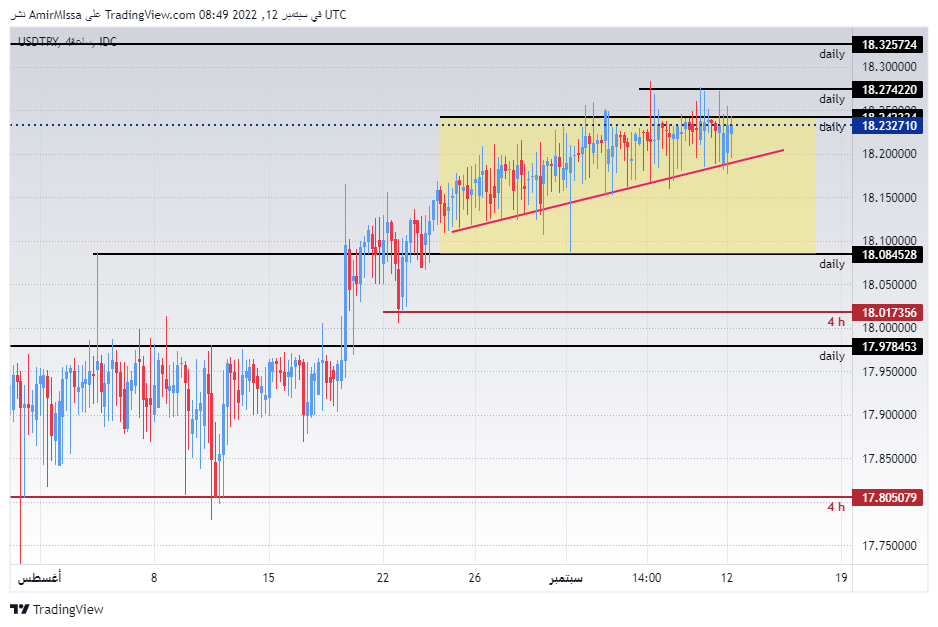 Trading Forex With Bitcoin: What Are the Gains and Losses?

Chart Of The Day: Why Bitcoin Will Keep Falling

Chart Of The Day: Why Bitcoin Will Keep Falling

Investing in Health for All