The chance of the lira rising against the dollar is still slim as the pair is heading in an overall bullish trend.

Today’s recommendation on the USD/TRY

The Turkish lira recorded a new low against the US dollar, as the Turkish currency maintained its falling levels. Investors followed economic reports published by Bloomberg Agency, which showed the Erdogan government’s tendency to provide more low-interest loans to companies within government support programs for companies, amid the AKP government’s focus on the 2023 elections.

According to sources not mentioned in the report, the loans will be provided through a guarantee fund credit. The fund, which was established during 2016, expands the participation of banks in guaranteeing the credit risks of companies. Erdogan’s government seeks to maintain economic growth of more than $800 billion by subsidizing businesses. It is noteworthy that the government’s explanation for the interest rate cut during the last month was to provide financing at a lower cost to companies while directing those loans to sectors with the greatest need.

In general, and largely outside the government’s control, the lira is not expected to rise in the near term, especially considering the strong dollar’s rise.

On the technical front, the US dollar recorded a new high during yesterday’s trading, settling at the 18.27 level, before returning within a narrow range, which is shown on the chart. The pair traded the highest levels of support, which are concentrated at levels of 18.10 and 17.98, respectively. While it is trading below the resistance levels at 18.28 and 18.33, respectively.

The pair is also trading above the moving averages 50, 100, and 200, respectively, on the four-hour time frame as well as on the 60-minute time frame, indicating the long-term bullish trend. The chance of the lira rising against the dollar is still slim as the pair is heading in an overall bullish trend. Each decline of the pair represents a good opportunity to buy, please adhere to the numbers in the recommendation, with the need to maintain capital management. 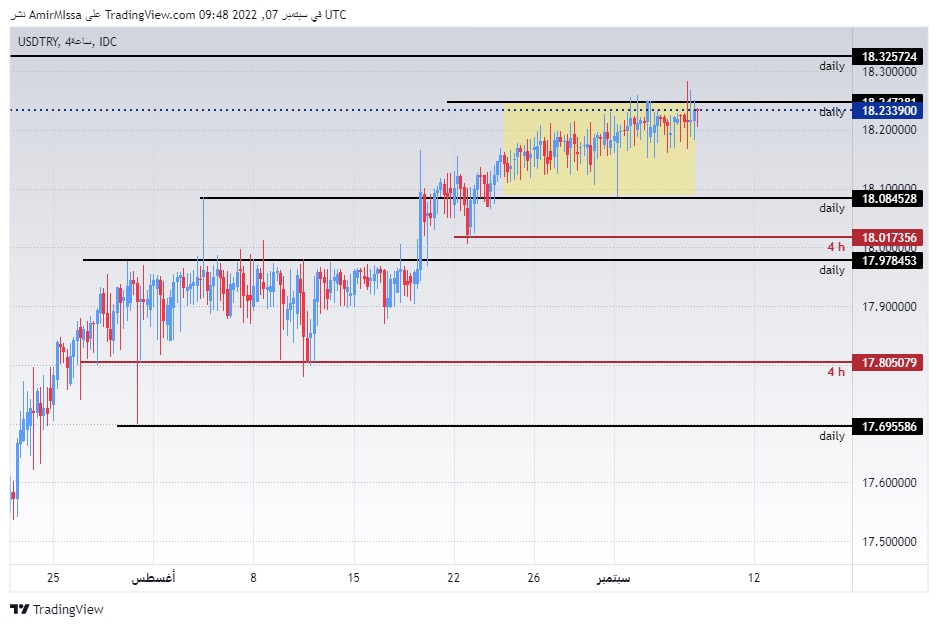 Ready to trade our free Forex signals? We’ve shortlisted the best Forex trading brokers in the industry for you.

Dismantling cryptocurrency regulations is a step backward, not forward

Dismantling cryptocurrency regulations is a step backward, not forward

These are the top U.S. states for Bitcoin mining, according to an Ivy League study