Will the ECB Offer Anything New?

The pair moved on its impact towards the resistance level of 1.0093, the highest for the currency pair in a month and a half, amid a noticeable decline in the performance of the US dollar against the rest of the major currencies.

Despite discontent with rising borrowing costs from politicians including new Italian Prime Minister Giorgia Meloni, all economists surveyed by Bloomberg expected a second straight rise of 75 basis points on Thursday.

Money market investors agree, suggesting that the deposit rate will double to 1.5%. The driver is inflation, which is close to 10%, five times the ECB’s medium-term target. Pulling it back toward that level takes precedence so far in protecting the economy from an energy-induced downturn this winter. After the decline in the Euro, the European Central Bank is also under pressure to keep pace with the aggressive increase in interest rates by the Federal Reserve. Other topics will be discussed by ECB Governor Christine Lagarde and her colleagues, who are still considered behind the curve in the face of rising prices. Officials may move to limit gains for banks that are needlessly benefiting from higher interest rates, while also debating when to start reversing trillions of euro asset purchases in recent crises.

The European Central Bank’s interest rate decision is due at 2:15 pm. In Frankfurt, 30 minutes before Lagarde held a press conference.

All in all, hawkish members of the European Central Bank’s Governing Council, such as Germany’s Joachim Nagel, insist that interest rates must continue to rise, despite a looming recession, because inflation is alarmingly fast. Doubling the deposit rate to 1.5% would bring it much closer to the level that officials consider to have a “neutral” effect on the economy.

Some argue that prices may have to be pushed beyond that point, into a restricted area, to control prices. Others cautioned against exaggerating the pace, for fear of having to back off later – recalling policy mistakes during the global financial crisis.

There are also signs of emerging political opposition against raising interest rates into a recession. Meloni criticized the European Central Bank in her first address to Parliament this week, while French President Emmanuel Macron warned against crushing demand with increases. The pace of increases is likely to slow to 50 basis points in December, according to economists, who see two more steps at half that size before peaking. Indeed, the ECB’s endpoint is quickly becoming the focus of market watchers.

The sudden rise in borrowing costs left the European Central Bank facing a difficult decision about trillions of euros of liquidity created in part through a crisis-era program of cheap loans to banks. Under the current situation, lenders can earn risk-free income by holding this cash in the central bank – a situation many consider unacceptable as inflation is putting pressure on households and businesses.

There are also implications for the ECB’s policy transmission and financial markets.

According to the performance on the daily chart and as I mentioned before that the stability of the euro currency pair against the US dollar, the EUR/USD above the parity price will support breaking the bearish trend. However, the euro still needs more stimulus to ensure the continuation of the rebound upwards, and today it may depend on the reaction of investors to what will be released from the European Central Bank. As the US Federal Reserve is still racing at the tightening pace. The presence of the momentum might support the EURUSD’s move towards the resistance levels at 1.0120 and 1.0200, which supports the strength of the current rebound.

On the other hand, with the lack of momentum from the European Central, the bulls may not find the opportunity, therefore the bears will regain control, especially if the currency pair moves towards the 0.9960 and 0.9870 support levels, respectively. In addition to the policies of the European Central, the euro-dollar will be affected today by the announcement of the growth rate of the US economy, numbers of durable goods orders and weekly jobless claims. 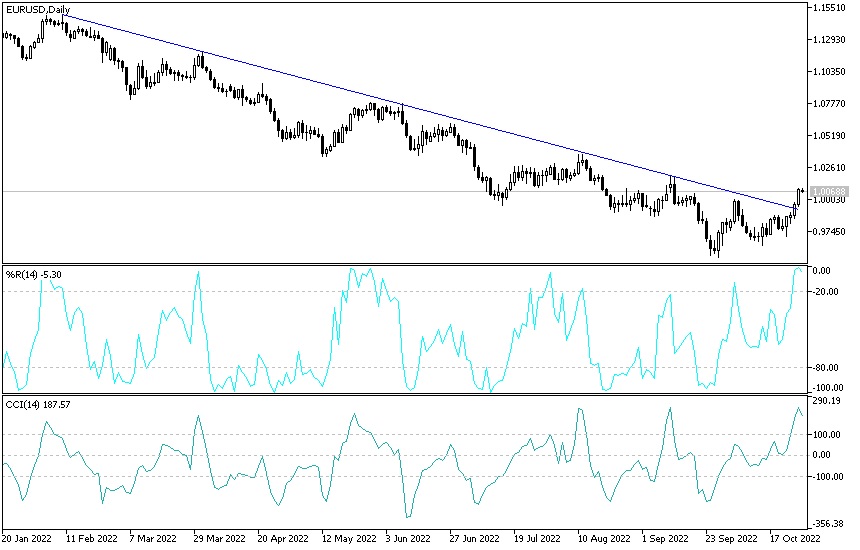 Ready to trade our Forex trading predictions? Here are some excellent Forex brokers to choose from.

Should You Consider Investing in Enhabit (EHAB)?